This video shows the addiction rates in Florida and how easy the “pain management” centers are making access in Florida.  What I found interesting is the mother of

one son shows the bags, everything he was able to get and compares her bag of 30 Vicodin tablets she was given to take after major surgery.

In Broward county they don’t have a data base that tracks the drugs, thus many of the pain management stores locate there.  It sounds like they need a data base set up soon as “doctor shopping” is simple and easy.  One of the patients talks about going to 5 doctors to get his medications.  The advertising for pain medications is all over the newspapers too.  85% of the Oxycontin dispensed in the US comes from Florida.

The video actually goes with an addict to watch and see how easy it is for addicts to visit the clinics to get medications although the wait time might be a while as the waiting rooms are crowded.  One patient gets his medication from a 70 year old woman who is selling OxyContin.  This is a fairly long video to watch the entire process.  One clinic actually had security guards outside and the parking lots were full.

When filming the documentary the owners of one clinic actually follow the filming crew with their cars and they had to call the police.  One of the cars was registered to the owner of the clinic who had already served time for trafficking opium products.  The clinics are a “cash” business.  People are driving from other states to Brower County to get their pills, like one example was a patient from Kentucky and another from Ohio.

There are legitimate “pain management” physician practices but these clinics are not that.  Kentucky is leading the nation for “Hillbilly Heroin” in other words Oxycontin and the doctors in the ER room can name the physicians they have never met but see the names on the prescription bottles from the doctors in Florida when over dose patients come in.  Xanax seems to be prescribed along with the Oxycontin too.

The film crew visits a group of “Pillbilly” women, in prison for possession or distributing Oxycontin.  The sheriff in a Kentucky town talks about his war and how he’s working to help clean up some of the abuse.  Many of the clinics do not use computerized records for obvious reasons, no records of the transactions.  This is one are where electronic medical records are not a priority for all the wrong reasons.  The sad thing is that it is easier to get the patients reselling the pills than to catch the doctors and clinics prescribing the pills.

There is a new law in Broward County that goes into effect at the end of 2010 to establish a data base to check for doctor shoppers.  This is a huge example of where data and technology are needed but sometimes budgets and those in office don’t embrace technology and this is the sad outcome as that data base could have been established a while back, we have one in California.

As a footnote, the company that manufacturers Oxycontin, Purdue Pharma just received FDA approval this week for a patch that uses transdermal systems to deliver pain medication instead of pills.  BD

In this Peabody Award-winning edition of Vanguard, correspondent Mariana van Zeller travels to South Florida--the "Colombia of prescription drugs"--to expose a bustling pill pipeline that stretches from the beaches of Ft. Lauderdale to the rolling hills of Appalachia. "The OxyContin Express" features intimate access with pill addicts, prisoners and law enforcement as each struggles with a lethal national epidemic. 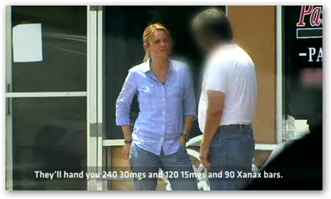 ***Vanguard is Current TV's original documentary series. Led by correspondents Laura Ling, Mariana van Zeller, Christof Putzel, Adam Yamaguchi and Kaj Larsen, Vanguard features enterprising reports from around the globe. It airs every Wednesday at 10pm on Current TV. And you can view all Vanguard stories by visiting current.com/vanguard.***