All 7,500 Walgreens Stores, Clinics and Duane Reade, Offering Flu Shots for Walk Ins and Online Resources Available to Complete Forms Ahead of Time Too

It looks like Walgreens is going to be up on the flu shots this year which is a good thing as most primary care doctors may or may not decide to stock them so we have it open on a somewhat massive basis here.  Walk ins are fine the article states and this is at the stores or in their clinics.

I never thought of a gift card for a flu shot before, but they have those too for $29.95 that will be honored at any Walgreen’s pharmacy or Take Care Clinic.  Cigna and United have announced a direct bill if you are covered by one of those carriers and Medicare and Medicaid also have coverage for flu shots as well.  IN case you missed it, Walgreens can now text you as well on prescriptions.

While there you could also get an assessment on your health too as the pharmacists are motivated with pay for performance for their efforts.

I expect the the other guys to have a flu shot press release soon as when one chain does something, it’s usually only a short time before the other folks have their program announced.  BD

Walgreens is offering unprecedented access to flu shots, with 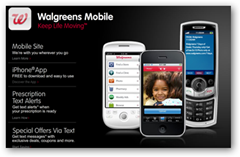 immunizations now available at every Walgreens pharmacy and Take Care Clinic nationwide, every day, during nearly all pharmacy and clinic hours -- with no appointment necessary. Most New York City-area Duane Reade pharmacies are also now offering flu shots daily, with all Duane Reade stores expected to be offering them during all pharmacy hours by September. State, age and health condition-related restrictions may apply.