This is probably a very good strategic location and being not too far from Washington, perhaps those in government leadership positions may get a better picture of the importance of the cloud which the Senate chose not to budget.

See what I mean about these folks in the Senate being non participants as they probably would not have sent the funding down the river if they understood more and were at minimum active participants in general consumer digital literacy. 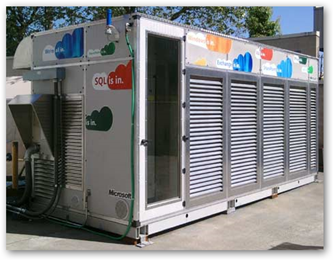 According to this article the State of Virginia went all out to get the award of the data center and just yesterday I posted about the new Microsoft Cloud services for state and local governments, and the data centers here are the clouds.  After the big outage this week suffered by the state I’m sure they may even be more anxious to look at alternative here with data.

The link below has a video that explains the entire data system project and how the containers work.  I spent many years in logistics and never did I think we would see “containers” being used to store data, but it makes sense.  I like the new look of this one pictured, modular to keep the cost down with building the center.

Microsoft has selected a site near Boydton, Virginia for a major new data center project, with plans to invest up to $499 million in the rural community in the southern part of the state. The company plans to build a cutting-edge data center that will serve as the East Coast hub for Microsoft’s online services.

Microsoft’s decision is being welcomed by officials in Virginia, which engaged in a pitched battle with neighboring North Carolina to win the huge project, which will create 50 new job

The Boydton site has strong fiber connectivity from existing routes supporting a government data center in the region. The fiber optic network of the Mid-Atlantic Broadband Cooperative (MBC) was described as a”key component” in Microsoft’s decision to locate in Virginia.

Microsoft has built four huge data centers to support the growth of its online business, including its Windows Azure cloud computing platform. The sites in Chicago, Dublin, San Antonio and Quincy, Washington have each been in the neighborhood of 500,000 square feet.

Microsoft has been operating a pair of data centers in northern Virginia, where it has been one of the largest tenants in data centers operated by DuPont Fabros Technology (DFT).