Sanofi Proposal to Acquire Genzyme Rejected–Looking for Other Alternatives

Genzyme produces Fabrazyme and Cerezyme, which are drugs for two rare genetic disorders.  Genzyme is the sole supplier of the medicines in the United 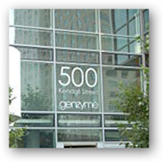 States.  As reported last year the company has had some issues here and with the FDA with contamination; however their research and what they are doing still holds interest for Sanofi.

During this real virus scare, not a computer virus, the plant had to be closed until everything was back up to par.  BD

"We are prepared to consider all alternatives" to working with Genzyme's management and board of directors in order to carry out the acquisition, Sanofi Chief Executive Chris Viehbacher told a conference call Monday. He added that it is too early to speculate on the possibility the bid could turn hostile.

Viehbacher said Sanofi had "no choice" but to go public with the $69-a-share offer Sunday after its attempts to hold discussions with Genzyme management were rebuffed.

Sanofi: To Consider All Options After Genzyme Rejects Bid - WSJ.com