This article does a good job asking questions on how the non profits calculate charity care with the example of an appendectomy as an example.  A person with no insurance would be charged $11,000 but if it were covered by an insurance 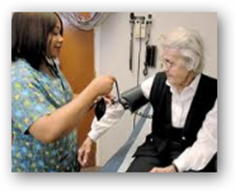 contract with a covered patient, the hospital would receive half that amount, and yet are some hospitals claiming $11,000 worth of charity care?  We really don’t know the answers here until the books are audited.  In California competition is getting really tough and ambulances are now donating advertising room on the side of their ambulanced.

Some smaller free standing non profits are being swallowed up by other larger non profit groups for pennies as they are to the point to where they are out of money.

Non profits can also pump money into community-health programs to help with the amount of charity and community care they give.  Non profits are also buying up doctor practices in their immediate areas.  In summary the article makes the following statement which I think is right on the money.

The Wall Street Journal also had an article today about how Cash Poor Governments are ditching hospitals too as they are too complicated to run and the government budgets themselves are broke.

It does make one wonder how long before all hospitals could move into the for profit areas in time as mergers and acquisitions will continue as many run of out money and are operating in the red.  BD

ORLANDO - When Florida Hospital and United Healthcare started their public wrangling over a new contract this summer, each side pointed to the other company's profits.

Both companies are health-care behemoths. Minnesota-based United Healthcare is the largest health insurer in the United States, with profits of $3.8 billion in 2009. Adventist Health System, which operates Florida Hospital system, is the largest nonprofit Protestant health-care provider in the nation, operating 37 hospitals in 12 states and generating $363 million in profit in 2009.

"If you go back 100 years, these were charity hospitals. They took care of the poor," said Frank Sloan, a professor of health-care economics at Duke University. "But as health care has grown, they've become commercial. Now these nonprofits are in a big business."