I guess those on Wall Street are finding a need to change their addiction from the constant high to a level of relaxation of sorts.  Current economic conditions and instability are enough to give the “high” effect it sees whether we want it or not with stress levels at all time highs so perhaps the cocaine era is slowly drawing to a close with the downers moving up? 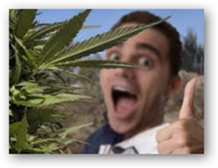 As you can see by the article below, rehab facilities seem to be full and one interesting comment made within is the fact that some feel they are entitled to using the drugs as they need them for the daunting stress levels they endure, and well I guess anyone who wanted to could try and make that case.  We all know about prescription drug addictions today too so if it is not the weed, perhaps one of the many pills for anti depression might be a drug of choice here.  BD

The credit crisis appears to have sobered up Wall Street in more ways than one.

A review of drug-test data compiled by drug testing firm Sterling Infosystems Inc., shows that cocaine is losing its favor among investment professionals. What drug is their choice? Marijuana.

Last year, cocaine showed up in 7% of the positive tests at Wall Street firms, down from 16% in 2007, according to Sterling, a New York-based firm that screens about 5,900 employees a year for some 270 finance shops.

Seabrook House, a 24-bed luxury rehab facility in Pennsylvania, has been crammed with Wall Street refugees in recent months, according to Clinical Director William Heran. They are paying $24,000 for a three-month program to get clean.