Home » Medically Related » Other Items of Interest » The Full Sized Bachelor Looking for the Full Sized Woman – Will “More to Love” Help Obesity?

One of the interesting portions on the videos is that everyone is shown not only with their name, but their weight as well.  Considering the country's rising obesity levels and all the healthcare concerns on the web, is this somehow overlooking the concern and issues?  On the other hand it’s ok to see those in plus sizes on TV too.  You can make your own opinions on this one, but you might think their health insurers with national exposure might be sending a health coach their way or maybe suggesting incentives and ways to lose a pound or two.  One of the controversial items was the fact that the women were calling slim women "skinny bitches" so I guess some battle lines, or at least for entertainment on the show were drawn.

What next for marketing and entertainment?  I do have to say too that I don’t care for the Bachelor or Bachelorette either so they are all in the same boat in my opinion, let’s get some new real life entertainment out there.  I happened to be watching a comedian on television and he mentioned 2 other names for some new reality shows, ‘Wheel of Pork Skin” and “Waffle Swap”, again I think he was trying to make a point on how far does marketing go and to what extent will we continue to buy in.  BD 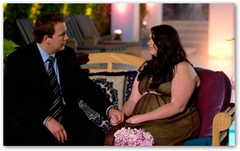 MORE TO LOVE, the new dating competition show from Mike Fleiss ("The Bachelor"), follows one regular guy's search for love among a group of real women determined to prove that love comes in all shapes and sizes. The inspirational new series is hosted by iconic supermodel Emme. 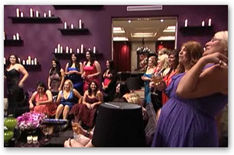 Luke Conley is a 26-year-old former college football offensive lineman who stands 6'3" and weighs over 300 pounds.