Home » Microsoft/Windows News » Technology » Windows Mobile » Not a Smart Phone User Yet? Microsoft Will Have You Covered – OneApp Coming For Non Smart Phones

Not a Smart Phone User Yet? Microsoft Will Have You Covered – OneApp Coming For Non Smart Phones

It won’t be that difficult to use either, they are already using it in Africa, so hopefully we will have some real incentive here to catch up with today’s

technology for those who still just use their cell phones for phone calls.  Even Facebook and Twitter are included so now there’s not excuse for not being efficient when the software is available in the US.

I just have one question, where’s the HealthVault?  Well maybe I am ahead of myself and perhaps once OneApp is available in the US,  HealthVault will be there.  It’s also a platform so they are looking for developers too.  Will this compete with smartphones, well I don’t think so as I would not give up mine by any means as there is software and other features that I need and besides that, I like the bigger screen.  BD

What do the iPhones and Blackberries of the world have that your run-of-the-mill mobile phones do not? In a word:  apps. In two words:  killer apps. In fact, a man was so upset about Apple's decision to not allow GoogleVoice app that he shot and burned his iPhone 3GS.
Now, Microsoft released MS OneApp to bring the premium experience of smartphones to feature phones that are often found in emerging markets. Now your average mobile phone can access such apps as Facebook, Twitter and Windows Live Messenger, vastly enhancing the user experience - with the phone you already have. Is there a catch Microsoft, what's being charged for this software? 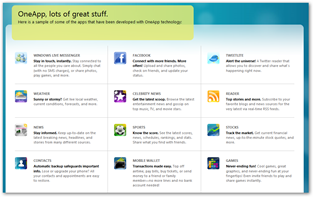 How is OneApp going to work? Your average feature mobile phone does not possess the processing capabilities of a smartphone. Microsoft thought of that. From its conception, OneApp was designed enable mobile apps to be accessed by feature phones with limited memory and processing capability. OneApp will appear as one application, hence the name, to users. From the press release:  "OneApp dynamically launches just the parts of a mobile app that a person wants to use, eliminating additional installation time and the need for a person to store all of the mobile apps on the phone. OneApp includes cloud services that help offload processing and storage from the phone to the Internet, improving overall performance. OneApp uses data networks efficiently to reduce data access charges, saving money for the customer." Mark Levy, joint CEO of Blue Label Telecoms: "With a GPRS-enabled cell phone, consumers can now be part of the app experience, which is taking the world by storm. While this opens up a whole new world of opportunity for any and all users, advertisers and developers, we're particularly excited by the technology's capacity to transform nearly any cell phone into a highly sophisticated, cost-effective and user-friendly transactional device."