There’s not a lot more to say here as he had the battle with brain cancer and was very courageous right up to the very end.  We lost an ally in

healthcare today too.  This comes almost right on the heels of the death of Eunice Kennedy Shriver.  BD

“President Obama presented the Medal of Freedom to Ted Kennedy's daughter, as the senator battles cancer. As Bill Plante reports, Obama modeled his career on the Kennedy family legacy.”

The man known as the "liberal lion of the Senate" had fought a more than year-long battle with brain cancer, and according to his son had lived longer with the disease than his doctors expected him to.

"We've lost the irreplaceable center of our family and joyous light in our lives, but the inspiration of his faith, optimism, and perseverance will live on in our hearts forever," the Kennedy family said in a statement. "He loved this country and devoted his life to serving it." 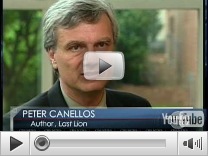