Granted this is not mainstay yet, but as I have mentioned before, you may not be able to count on the current business models to stay the way they are with insurance, as everything today out there seems to be subject to change, like daily.  So far it has only been a small number of patients who opted to stay in the US that were offered tourism packages, but as saving money stays up front in everyone’s mind, could there be more pressure on employers to promote medical tourism, and the effects on the doctors and hospitals again mean less money.

There’s even a solution created for employers who encourage medical tourism for cheaper rates too, more insurance to protect employers from litigation who encourage tourism through their negotiated carrier contracts.  One other item to think about too are the growing numbers of international accredited hospitals, which has increased about 1000% in the last 4 to 5 years. 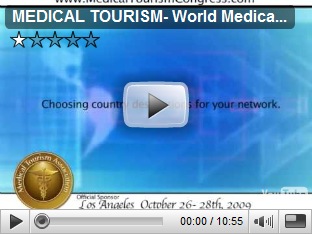 One of the hot topics you will see in the video is how to incorporate medical tourism into insurance companies.

There are even road shows to promote tourism.  Insurance companies and hospitals alike are meeting on the topic.  Countries like New Zealand and Israel have entered the market.   Mexico is building hospitals for medical tourism.  Tourism creates shortages in Thailand for regular citizens.  In Texas, many are going to Mexico.

UnitedHealthCare CEO – “Our Shareholders Will Prosper”

I mention all of this again to bring an awareness and to remind folks that business models will change and business intelligence software will continue to be utilized to analyze risk and cost, so something to think about when looking a private insurance and keep an open mind as to how their practices and contracts could be subject to some major changes.  Again, as mentioned above, with added provisions for employer insurance, and the insurance to protect from litigation, hospitals and doctors could again see more cuts in compensation to meet or get close to what the tourism rates could be with other countries.  BD

The South Carolina resident went out of her way, literally, to find a solution, which turned out to be in Central America. Her trip to the tropics is part of a health insurance experiment for trimming medical costs: overseas care.

Kunz, 47, initially doubted the potential savings she might see from visiting a Costa Rican dentist though a program offered by her insurer, BlueCross BlueShield of South Carolina. But a little comparison shopping - with help from the insurer - persuaded her to get on a plane.

She had eight crowns replaced, a tooth filled and root canal. The work would have cost her $10,000 out of pocket back home, but she paid just $2,800 after insurance.

U.S. employers who encourage an overseas medical trip could become litigation targets. It can be difficult to sue an overseas provider in U.S. courts, said Nathan Cortez, a Southern Methodist University law school professor who studies medical tourism. And the average malpractice recovery in Thailand is about $3,000, roughly 1 percent of the U.S. average.

To ease this fear, medical tourism companies have started offering insurance that protects employers who send employees overseas from liability.

Some employers also have learned they don't have to send people overseas to save money.

Shortly after Hartford, Conn.-based Aetna Inc. and the Maine-based grocery chain Hannaford Bros. Co. launched a program to send patients to Singapore for hip and knee replacements, some New England hospitals countered with their own deals.