When it comes to security you can’t take too many precautions.  This article from the LA Times talks about someone who used to be on the other side who now is unleashed by his employer to see if your system can be hacked.  The scary thing in this article is that he’s not found one he can’t hack, so if you want to have your system checked to see how secure it really is, this could be the guy.

This is worth a mention as we keep reading about security breaches and everyone is constantly exploring how to patch up the holes, and healthcare is at the top of the list.  BD

Marc Maiffret used to be a computer hacker. Now he gets paid to break into the systems of Southern California businesses, testing for security weaknesses. 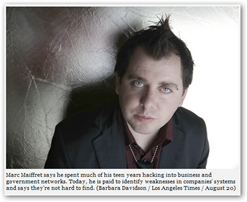 His client today is a major Los Angeles auto dealer, which sells fancy luxury cars to celebrities and corporate execs. The head of the company wants to check on the safety of his customer data.
It's not an idle worry. Just days earlier, a 28-year-old Miami man was charged by federal authorities with hacking into multiple computer systems and stealing 130 million credit and debit card numbers -- the largest computer crime ever prosecuted.

Jason Lidow, founder of the L.A. computer security firm DigiTrust Group, says most people and businesses have no idea how easy it is for a cyber-thief to make off with sensitive data.
DigiTrust is the company that unleashes Maiffret on paying customers.

There was a time when you couldn't trust Maiffret. He says he spent much of his teenage years hacking business and government networks. His come-to-Jesus moment came when he was 17 and the FBI took an interest in his activities.
"I wasn't arrested," Maiffret says. "But that's when I understood this wasn't a lifestyle I could keep."
So now he hacks on the side of truth, justice and the American way -- and a steady paycheck.

Afterward, I ask Maiffret how often he comes across a client's computer system that he can't hack.
He smiles sheepishly.
Never?