IBM Files Patent For A TV Remote That Tweets

Interesting that IBM is looking to create some monetary action potentially here with a Twitter Remote.  This is just at the patent stage and if you

want more details, use the link below to read up at Tech Crunch.  Gee, everyone can walk around with their own Twitter remote soon, and just think how convenient it will be to Twitter from the OR or even the ER (grin, little satire here) just turn on the TV.  I am a big fan of Twitter but not sure if I want a remote 24/7 though as sometimes I like to escape Twitter World for a few hours or so and the remote might just do me in.  Psych drugs though could see an influx though as perhaps a new disease could be created with the addiction, “The Twitter Jitters” and we could have a pill for that too! (this is humor and don’t take this seriously unless you intend to create a disease that requires treatment).

Who’s next on the remote list, Facebook, well I guess they need to talk to IBM too.  BD 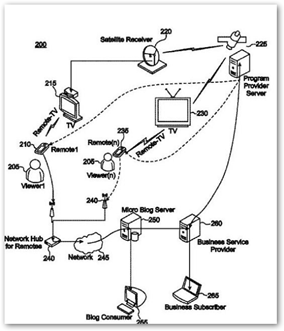 Slouchers on Twitter (you know who you are), take note: IBM is apparently working on technology that would enable you to blog or tweet straight from the remote control of your TV. The company has filed a patent for said technology with the USPTO, reports BaltTech.

According to the patent filing, the remote would even allow a viewer to not only communicate with a blogging service but also display responses to and from other bloggers with whom the viewer is communicating. That’s right, that means your buddies could be sending you an @reply or direct message with their opinions on the show (and the actress) and you’d be able to view the responses simply by using that super remote of yours.