The opposition is ready and has a commercial to debut on television, video below.  Back in January though, I watched the film put out by the Senate Finance committee and didn’t see anyone in the room who knew much about electronic records and none seemed to know what a PHR was, so how

involved in their own healthcare are our Congressmen and Congress women?  It’s just my opinion here but I certainly think some first hands on experience on what is to be prescribed for the rest of the citizens can’t hurt, so we don’t end up with “Magpie Healthcare”.  BD

It's increasingly clear that the Obama administration's health care reform plan will happen via budget reconciliation, which requires a simple majority in the Senate instead of a filibuster-proof majority.
At his briefing earlier today, White House Press Secretary Robert Gibbs blasted Sen. Mike Enzi (R-WY) -- one of the "gang of six" negotiators on the Senate Finance Committee seeking a bipartisan health care compromise -- for repeating "generic Republican talking points" in his party's weekly radio address. 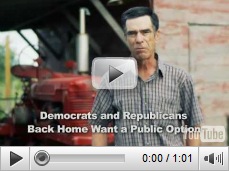 This comes as news breaks that Sen. Charles Grassley (R-IA) -- the top Republican on the Senate Finance Committee -- is actually raising money for his re-election campaign on the basis of stopping President Obama's health care reform efforts.