Oprah and Dr. Oz Go After the Resveratrol Anti-Aging Scammers

This is a good move on their part as well with the lawsuit as sites are just grabbing names and using Dr. Oz as an open endorsement.  What is even stranger is that the endorsements from reporters have been fabricated too, in other words the reporters who are listed as journalists do not exist either!  This looks to be well structured too and gets right to the point where the problem lies, the websites. 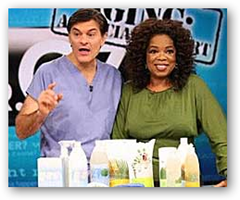 The legitimate Resveratrol Vendors should also be pleased if the suit is settled and those using endorsements that are perhaps fabricated are stopped from continuing.  The Illinois Attorney General is also in on the activity due to complaints and has filed suit against Netalab Corp. and Crushed LLC.  The big issue too is the fact that the reporters are using Dr. Oz and Oprah, stating they recommend specific products and not just resveratrol in general, and the network of websites seem to pop up and disappear with new fictitious endorsements.

I would be interested myself to see what type of money is being made here too.  Resveratrol is an anti-aging substance found in red wine an in dark chocolate.   BD

Rachman's suit asks that the companies either transfer the domain names to Oprah and Dr. Oz, paying them three times the profit each has made using the endorsements, or award the plaintiffs up to $100,000 per domain name.

Oprah Vs. The Supplement Sellers - Forbes.com

Swine Flu: Dr. Oz Speaks Out and Gives Some Advice and Information

Regenerative Medicine – Material and Cell Based Regeneration of the Human Body