Houston Health Insurance Survey – Scattered, Disputed, One Doctor Stated He Was Laughed At

This survey was conducted by independent contracted companies by the Houston Department of Insurance.  There’s also a video at the link worth watching.  One physician stated they “laughed” at him when trying to resolve denied claims and says he spends as much if not more time on the 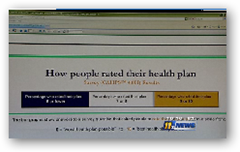 claims these days than he does seeing the patient.

United and Blue Cross have the lion’s share of policy holders in the area.  United disputed the results and said numbers were either outdated or not accurate via email.  Complaints from patients were down, well maybe because many are not going to the doctor as they used to due to cost, and the complaints from physicians are up.

The red tape in billing and processing claims is real, that I know from some billing I do, it is a mess and you don’t know whether the claim has all run through an algorithmic process to be denied or if a human actually did analyze it.

You can go into almost any doctor’s office who takes insurance and see the mess of disputed claims and their work in progress today.  As a patient if you are curious, just ask your doctor how much time they spend on red tape related to claims.  All of this probably doesn’t make a big impact until “you” are the patient caught in the middle to see it first hand though.  Doctors will have denials for services already rendered.  The local television station takes matters into their own hands and does a little checking around, asking for interviews from BlueCross and United, but were turned down, so where do we go from here?  Any transparency in this business and should we be able to certify those algorithms for accuracy I ask?  BD

HOUSTON -- As the nation considers how to reform health care, big insurance companies doing business in Houston are dealing with their own health care problems. Based on a survey response, a third of their customers have ranked them poorly, according to the state.

The two biggest insurance companies in the Houston market are Blue Cross Blue Shield of Texas and United Healthcare of Texas. Together they dominate the market.

"Did a doctor look at this? Did a computer look at this? I can't tell. They're just denying it, saying you didn't submit sufficient information," Gilmer said.

He says it all seems like a way for insurance companies to make more profit. “They laugh at me. I've tried to negotiate fees and changes. It's almost humorous,” said Gilmer.