Here’s a short post that I made back in January of 2008.  After having made this post I had an anonymous comment and I thought in light of where we are today with health insurance that perhaps I would bring this one around again.  What is interesting in the comment section is that this individual states they are the CIO of one of the largest healthcare companies in the world, but they remain anonymous.  This is a must read as they state my 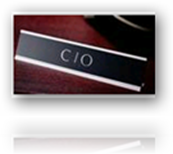 comments “cause CIO’s to struggle with their role in business”, gosh I never knew I had that kind of power (grin).

In being a CIO, his spelling could use a little work in a couple areas.  Anyway, I am told that I am to blame here for causing this struggle with CIOs but still he found the posts interesting enough to stir up a little fire here.  What I found most interesting too with all of this is the fact that he chose to be anonymous and yet puts big footprints in the comments as to who he is, after thinking a bit of IT knowledge for the CIO is not helpful in his opinion.

“I am a CIO and have been for several companies and interestingly right now in the sector you mention in one of the world's largest healthcare organizations.”

Well this blogger here like most do today, runs some nice SEO software, but again this CIO might not think that this level of intelligence would perhaps exist at the blogging level.  I went and looked at my records being curious to look for company networks connected (as that is all I collect here as nobody needs to use an email to log in so people can truly be anonymous if they like) and matched a company network name connected to the blog at the time the post was read, and bingo, I figured it out!  I won’t say which one but it is the big “I” or insurance business.

In short, a little IT knowledge would have really helped him remain anonymous by perhaps going home and logging on to make his comments where the network would show a generic cable company, phone company or otherwise generic network connection, i.e. Verizon or Cox.  In his comments he appeared to be bursting at the seams to divulge his level of knowledge which is what made me decide to go look and see if there was a name network connected.  He certainly doesn’t stop short of telling me that he’s been a CIO at several places too.

Below is the original post followed by screenshots of the comments and you can use the Title link above to see everything on the page as well.

Good article addressing the future of the CIO....health care in particular is a challenging role for the CIO...a good idea to make sure the CIO is in to servers, virtualization, outsourcing and Web 2.0 to build a solid organized future....CIOs of today and tomorrow need leadership, communication and IT skills....it's an executive as well as a "hands on" position....BD

For example, in healthcare, with a growing number of regional health information organizations, CIOs have responsibility for providing data and interoperability not only to members of their own organization, but also other hospitals and healthcare entities. Here, careful management of relationships with entities where there is no formal reporting structure becomes critical. 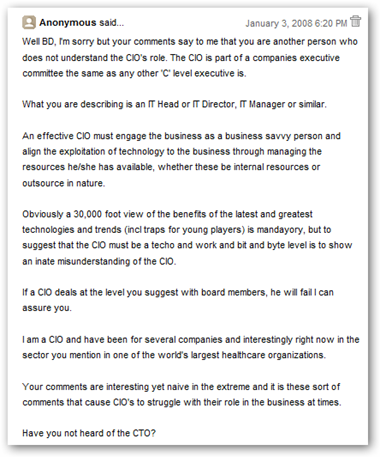 I did return the comment, I think very appropriately.  I don’t see this as representing your normal CIO by any means, it was just “this” one in the “I” business, and again I am amazed at how either myself or any other blogger has such unyielding power to cause them to struggle (grin), this one needs a reality check and maybe he’s been a CIO at too many places and the stress is catching up.  Oh well, he’s more than likely making his millions and blog commenting could be just a mere hobby and I believe he may be a bit naive in not  understanding the full level of intelligence that exists today with the complicated algorithms that are run, even at his place, that is if he is still there.  He sounded very much like a “Wall Street” type CIO more so than a Healthcare CIO to me.  BD 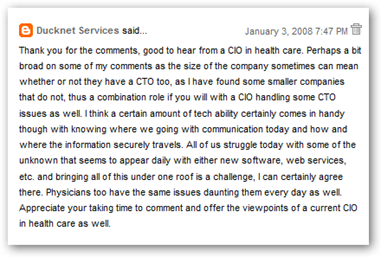