Last year we had the secret billionaire’s club meeting and you can read more at the link below.  Attendees included Oprah, Ted Turner, and others getting together to discuss what they could do to make the world a better place.

Both Warren and Gates have publicly announced that much of their own wealth will be donated to charity when they pass on.  In other related philanthropy news the Wall Street Journal reports Salesforce.com Inc. founder Marc Benioff will donate $100 million to a new children's hospital at the University of California, San Francisco.

Bloomberg also reports Eli Broad (The Broad Foundation) and his wife, Edythe  pledged 75 percent of their wealth to charity, the Los Angeles billionaire and philanthropist said in a statement today part of  “The Giving Pledge,” as well. 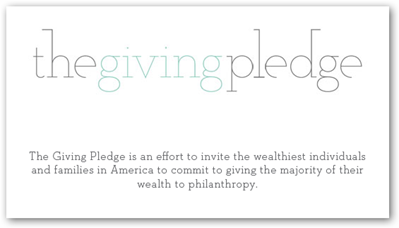 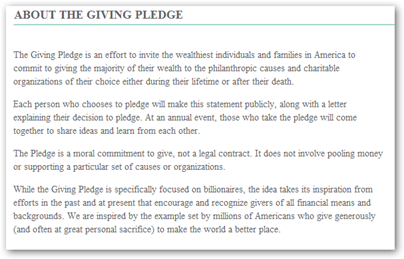 Melinda Gates was the organizer and coordinator of the website for action.   With the Bill Gates and Melinda Foundation, many healthcare projects have been funded.

Hopefully there will be more news like this on the horizon too with more answering the call, we can certainly use it and appreciate their efforts by all means in times where we have been inundated with corporations that have been driven only by greed and have offered little in the way ethics and human support.  BD

Warren Buffett and Bill Gates say they don't want to be remembered as two of the richest men in the world as much as two of the most generous, reports CBS News correspondent Jim Axelrod.
"I have everything in the world I want, and then I've got all this surplus around - and I give away the surplus," Buffett said.
So the two men, with a combined net worth of somewhere near $100 billion threw a very exclusive dinner 13 months ago. They invited 14 billionaires, known for their charitable giving, including Ted Turner, Oprah Winfrey and Michael Bloomberg.

"We just started going around the table," Buffett told PBS' Charlie Rose. "And I asked each either couple or individual to sort of give a story of the evolution of their own philanthropic thinking and how they got where they are now and what they hope to accomplish."
The conversation last night led to this website Wednesday - givingpledge.org, where billionaires can post public pledges to give 50 percent of their fortunes away during the course of their lives or when they die.