This could lead to some very interesting information, that is if Ozzy decides to share his information as I think we would all like to know what his secret is that has given him nine lives.

He has also picked up a journalism gig writing a healthcare article in the Sunday Times of London, telling people what not to do.  In a related article from last year, 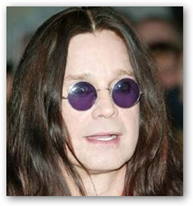 Keith Richards says science wants his body too when he goes.

Ozzy Osbourne is among the “worried well” who are signing up for a luxury map of their whole genome.

And while the founder of Knome Inc. admits they won’t unlock the secret to the hard-living musician’s survival, they will be able to find some clues lingering in his liver.  “Ozzy may in fact share gene variants with people who may be able to metabolize recreational drugs better than others,” Nathaniel Pearson told the Star on Monday.

But given the high sensitivity of liver genes to revealing how the body deals with drugs and alcohol, Osbourne’s results might be a revelation.

Osbourne, though, is a paying client. He was likely spurred, said Pearson, by his new gig as a health columnist for the Sunday Times of London. He’s written two so far, riffing on syphilis, euthanasia and the laxative effects of spicy food.

“By all accounts, I’m a medical miracle,” Osbourne wrote in his introduction to the Dr. Ozzy Osbourne column. “I was knocking back four bottles of cognac a day. While filming The Osbournes, I was shoving 42 types of prescription medication down my neck, and that was before all the dope I was smoking.

“And then there was the rabies treatment I had to go through after eating a bat.”

Ozzy among first to get revealing whole-genome sequencing - thestar.com