With all the talk about oil drilling today, natural gas drilling is also endangering our health, watch the video and see some flammable water coming out of the faucet.

In the trailer you hear of people not being “healthy” and it does make you wonder if this is something else we need to look at as far as preventive healthcare too.

In addition to the air we breathe today, the water may be a cause of certain diseases in certain area and when you look at the map in the video, natural gas drilling is going on all over the country for the most part.  The big companies offer big dollars for drilling rights.

Water wells are exploding too. 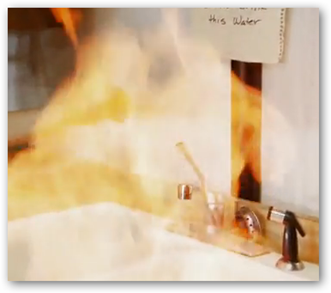 This is pretty frightening to watch a match strike up a fire to water coming out of the kitchen sink as it is full of natural gas!

The red areas on the map indicate where natural gas drilling is currently active in the US, and there’s a few states that have little or no activity, like the northwest and Florida for a couple examples.  This just goes to show another need to look at “green” technologies for future power needs, not to mention our health.  When you look at Texas, drilling is almost all over the entire state.  BD 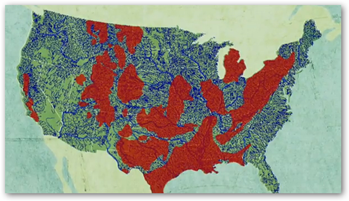 If you're Josh Fox, you refuse the money - then make an award-winning documentary portraying the natural gas industry as an environmental menace that ruins water, air and lives.

In "Gasland," premiering Monday at 9 p.m. EDT on HBO, Fox presents a frightening scenario in which tens of thousands of drilling rigs take over the landscape, gas companies exploit legal loopholes to inject toxins into the ground and residents living nearby contract severe, unexplained illnesses.

This isn't some dystopian nightmare, Fox says, but the harsh reality in communities from Texas to Colorado to Pennsylvania. "People are feeling completely upended," the 37-year-old filmmaker said in an interview at his woodland home near the Pennsylvania-New York border, where gas companies have been leasing thousands of acres of pristine watershed land in anticipation of a drilling boom.

He begins in Dimock, Pa., where an exploding water well revealed methane contamination that has ruined residents' drinking water supplies. He's handed a jar of mysterious yellow-brown liquid and asked to find out what's in it, setting up the film's principal drama.

In Colorado and Wyoming, Fox finds more sings of destruction, according to a Washington Post review: