Here we go once more with security breaches relating to healthcare, which really is a big deal but look at how slow Congress is too.  The link below was from a couple months ago and when I say we need roll models with leaders with technology, need I say anymore.  The P2P Cyber Protection and Informed User Act would require people sharing software to alert users when they encounter a P2P program which is NOT a solution by any means for the government and for healthcare. 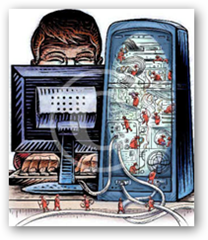 There are monitoring solutions and if you are a savvy enough network person you can use “group policy” to not allow the software and if you can’t figure that one out and if you happen to have Server 2008, throttle down to almost nothing the resources allowed for the software and users will give up when it takes a week to download one song (grin).

I personally have found peer to peer networks installed at hospitals too, although it has been a couple years ago, but they were there.  What is really kind of crazy about finding the software and discussing with an employee though is that they think the company or hospital computer is theirs!  I would usually reply with something to the effect that “your computer” is at home.  BD

In September 2009, the Obama administration’s Health Information Technology for Economic and Clinical Health (HITECH) Act went into effect, requiring hospitals and other health care organization to beef up client data protections. Despite this, a recent study found that health care data is still hemorrhaging from peer to peer networks.

A peer-to-peer, commonly abbreviated to P2P, is any distributed network architecture composed of participants that make a portion of their resources (such as processing power, disk storage or network bandwidth) directly available to other network participants, without the need for central coordination instances (such as servers or stable hosts).

It’s no surprise data is still leaking. File sharing technologies are easier and more user friendly than ever. Faster broadband connections coupled with faster PCs and bigger hard drives make downloading files a snap. Insurance companies, doctor’s offices and hospitals all have computers and those computers are operated by people who like things that are free. Any bored employee who wants to listen to that song he heard on the way to work can simply download Limewire, eDonkey, BearShare, or any other P2P network. Within minutes, that song is on playing on the employee’s iPod, and his employer’s clients’ data is being shared with the world. This type of breech resulted in blueprints for President Obama’s private helicopter being leaked online.