Back in October 2008 the new facility opened, state of the art and now we are less than 2 years later and the hospital is over crowded with patients in the hallways.  There were many studies made before building and with all the projections made it was anticipated with healthcare technology that less patients would need to be seen, but that has not been the case, so the projected studies here failed to provide the accurate information needed to build a new facility that could handle the patient load.

With budget cuts it was built for 600 beds instead of 750 and this is the result, another part of the debate issue and small won out.  The hospital has robots and a state of the art lab.  The link above gives some additional details about the facility.  BD

Even before the doors opened on the $1.02-billion Los Angeles County-USC Medical Center many observers warned that the new hospital was too small. 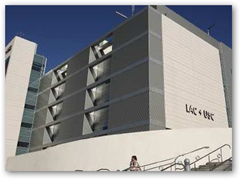 Now, more than a year and a half of experience appears to confirm it.
The overcrowding has become so intense that health officials asked county Supervisor Gloria Molina eight months ago what she would think if the hospital began placing patients in the hallways, the supervisor recalled in an interview.

Last month, the hospital's emergency room was overcrowded about 80% of the time, with conditions considered severe or dangerous for half of the month, according to the county's own standards.
The decision to build the new County-USC at 600 beds was made by the Board of Supervisors in 1997, three years after the 6.7-magnitude Northridge earthquake damaged the old, cavernous Depression-era facility, located just northeast of downtown in Boyle Heights.

The decision was partially based on politics, which included the board majority's distaste for Molina's hardball tactics and anxiety over whether a larger hospital would be affordable, The Times reported at the time.

"It's also a matter of capacity of the size of the facility," he said.

The health department faces a nearly $600-million deficit unless it can secure more federal funding. It is still working to reopen an emergency room and inpatient services in Willowbrook, at the site of the former Martin Luther King Jr.-Harbor Hospital.