I recently commented on the same issue myself with clarity being at the top of the heap.  It is a moving target though that never stops moving and new technologies as well as mobile devices are creating changes almost daily, is this new device meaningful?

In support of the CIOs though, don’t feel so bad as CMS had to outsource the creation of establishing a “Meaningful Use Data Base” with Northrop Grumman doing 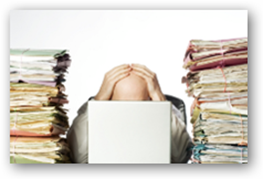 the work so the government is not in fact getting first hand involvement here in tracking it either after the CIOs can figure out how to meet all the standards and get on board.

The database is designed to avoid duplication of payments by collecting information about whether physicians and hospitals are participating under the Medicare or Medicaid programs.

We also have this in the news with HHS trying to come up with some type of plan to increase health literacy.  When it comes to the Hospital CIOs, you have literacy and a whole lot more and are talking to the top of the ladder here, but like the rest of us, they don’t really get an role models at the government level either in their area of expertise.

We are all being thrown a new left curve every day with Health IT.  Not too long ago I sat down with a small group of doctors who wanted to learn some basics of social networking and some of the “free” things they could do to get up to par, and these are all doctors with paper records.  They all had the right attitudes and were willing to learn but everyone was at different levels and the exact words spoken to me was “we need someone to help us through and hold our hands”, and that does not take any credibility away from the MD group at all, it’s a reality.

This is important too as the doctors and clinicians are the ones who will demonstrate “meaningful use” after the CIOs do their part as this is all teamwork and one big collaborative effort.  Data systems and red tape don’t excite doctors, curing and treating ailments as well as saving lives does.  BD

NEW YORK, June 29 /PRNewswire/ -- A year and a half after the American Recovery and Reinvestment Act allocated billions of dollars to help hospitals and doctors purchase equipment to computerize patient medical records, even the most sophisticated hospitals in the country are struggling to qualify for the payments.

Eight in 10 hospital chief information officers (CIOs) surveyed by PricewaterhouseCoopers LLP said they are concerned or very concerned they will not be able to demonstrate "meaningful use" of electronic health records (EHR) within the federally established deadline of 2015, according to a report entitled Ready or not: On the road to the meaningful use of EHRs and health IT, published today by PricewaterhouseCoopers' Health Research Institute (HRI).

Lack of clarity and a final ruling hinder meaningful use implementation. Guidelines for system certification were issued by the U.S. Department of Health and Human Services on June 7, but final guidelines for meaningful use criteria are not expected until fall of 2010, leaving many CIOs and their vendors at an impasse. CIOs surveyed by PricewaterhouseCoopers are most concerned about reporting requirements. Ninety-four percent of CIOs said they are concerned they can't meet government requirements about how to report meaningful use, and 92 percent are concerned about remaining lack of clarity in meaningful use criteria.

Sixty-three percent of CIOs said their organizations are either already working with physicians around meaningful use issues or plan to do so within the next six months. Moreover, an overwhelming 88 percent responded that meaningful use is somewhat or very likely to increase the involvement of non-administrative physicians in quality initiatives.