This is not quite what I expected to see as these guys look like small fork lifts that will be running around taking care of business.  When you watch the video you can 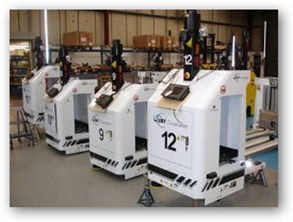 see they have their own assigned areas in the basement and a PDA can simply give a call for one to respond.

They will move on to dispense drugs too as they will do the sorting and labeling.  They will also sense a human getting in their path.  Light beams will guide the units and the doors in the hospitals are wide enough to allow them to move around.

If the robots break down, well there’s always us, the humans to fill in.  The article says the units will also clean the operating theatres so perhaps we will have some new videos with more action as the project moves along.  BD

A Scottish hospital is taking its healthcare into the realms of sci-fi by using a fleet of robots to carry out everyday tasks.

Forth Valley Royal Hospital in Larbert, is said to be the first hospital in the UK to use such machines to deliver and retrieve a wide range of supplies.

Trials are currently being carried out to test their efficiency before the hospital opens its doors to patients at the beginning of August 2010. The new self guided vehicles will not only mean patients and visitors can walk along corridors free of bulky trolleys, but will also help cut down the risks of infection and free up support staff from routine deliveries.

The robots use laser technology to find their way around. The technology is similar to that already used in car plants and industrial shop floors as well as in hospitals in some parts of Europe and the USA.  The machines will be loaded and unloaded in a basement area and make their deliveries to wards via a number of special lifts with separate flows for clean and dirty goods, to minimize the risk of cross contamination.

If a robot fails, an electric vehicle can be summoned to tug the robot out of trouble. And should there be problems with one particular lift the robots can be re-routed through a special sensor system, but that's what they said about SkyNet.  There will also be a fleet of 13 separate robots to help meet demand during peak periods and provide back-up, if required.

It also seems that there will be a fully robotic pharmacy system, capable of labeling medicines as well as stocking supplies and picking up drugs. Sounds like a dream come true for paranoid dealers. Robotic equipment will also be used to clean the hospital’s 16 hi-tech operating theatres.

We asked the hospital who would clean these robots and how much this would cost. However, it would not comment.