Now don’t take offense to this study that was done by Xerox, as you are in good company as this lack of understanding goes full circle.  Back in January of 2009 I watched the Senate testimonies about stimulus money for healthcare and viewed the actual Senate video they recorded.  It was a long but interesting watch to see the executives of both Kaiser Permanente and Microsoft explain to the members what electronic medical records are, and both testimonies were in fact very respectful in nature and were trying to explain “value” to the members of the Senate panel.  Kaiser Permanente explained their personal health record use very patiently and did a good job. 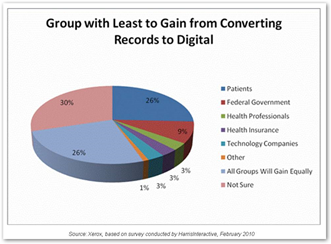 I say patience being exhibited as they have a few million participants already and the folks at the Senate were clueless on this fact.

Later one of the Senators, impressed with the Kaiser presentation from Jack Cochran asked Peter Neupert from Microsoft if they had anything like this, to which he very respectfully explained what “HealthVault” was and how it enabled consumers to work with and keep track of their own records and the Senators were enlightened and amazed with what they heard, again brand new information to most listening and you can hear the questions they asked as well, that’s the biggest give-a-way to the “clueless” understanding.

Hopefully a little over a year later I hope we have moved beyond this point with getting more of our leaders to engage Health IT technology and become participants, as this is a huge obstacle that stands in the way of progress.  You can use the link below to watch the long video if you would like to see the faces of astonishment as it was very clear they knew nothing about a PHR and this is somewhat where we stand with leader participation or should I say non-participation – it is what it is.

All of this adds to the “clueless” syndrome in the Xerox study sad to say.  What is ironic too in all of this is that HHS is addressing the issues of Health literacy when they in fact are perhaps lacking in their own, at least this is what I feel based on comments I see in the news and other issues reported by the media. 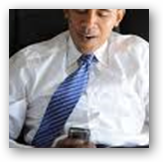 methodology drives distrust even further from consumers.  If you look at almost any web site you see images of “happy and satisfied” people using technology or products that are making their life easier to manage.  Do we get this from our government leaders, hardly, we just get a new blog added to the already over flowing blogs on the web.  Now there are different types of blogs out there too so we have to differentiate what in our minds is useful and what is not and I hope I’m on the good list here (grin).

I looked around to find some images on the web with government leaders using technology, even with just a cell phone in hand and I could not hardly find a thing with the exception of President Obama and there were plenty, so what’s wrong with government leaders embracing technology and displaying some of those images on the web?  That brings me around to the question of again, what do they really do with participating with Health IT and are they seeing benefits from their own participation, let’s not hide this fact if they are, as it has meaning, but I don’t seem to think they have figured it out yet as marketing and other sites beat us over the head with such.

I write about this topic all the time as it kind of irks me that many are not seeing the forest for the trees here.

If this is the game plan for all and to improve health literacy, it would really help if we had participation at all levels and drop the egos that seem to prevail with so many so called experts on this topic as technology is throwing us a new left curve every day, thus we have no long term experts.  BD

Notwithstanding the inclusion of $20 billion (and counting) being allocated to incentives for providers to adopt electronic health records in the U.S. as part of the HITECH Act of 2009, the American public lacks an understanding about what EHRs really are.

This stunning datapoint comes from a survey conducted for Xerox, illustrated in the chart.

79% of adults with concerns about EHRs report stolen records as their top concern, followed by misuse of information (69%) and loss, damage, or corrupted records (68%). The group that’s most concerned about stolen records are 82% of adults age 45-54. 3 in 4 members of the youngest adult cohort, 18-34, are concerned about lost/damaged/corrupted data. Here, the traditionally-thought-of Facebook Generation express their worries about the security digital health data.

What’s most fascinating is the group Xerox identified most keen on embracing digital health records: those 55 and older. This group was most familiar with the process of converting paper medical files to electronic formats, and feel EHRs mean better, more efficient health care. 57% of people 55 and older expressed that, in the words of Xerox, “the switch to digital is necessary.”