This almost has the sounds of a new reality TV show or maybe I am out to lunch on this one.  I say this because PBS has done a few documentaries on individuals that have been sequenced so with all the talk and publicity, perhaps this is moving in that direction.

Ozzy was originally going to pay it seems until he got a better offer here:)  We all know he loves the spotlight too and plus if we can learn how he has existed through drugging his body and drinking like mad with whatever fabulous genes he has, perhaps we could learn how to mutate some of ours to enjoy the same!  BD

A St. Louis startup has partnered with two other companies to sequence the genome of a very high-profile client — British rocker Ozzy Osbourne. 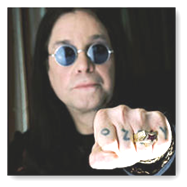 Cofactor Genomics LLC, along with Knome and Life Technologies, will examine the Prince of Darkness’s genetic makeup in part to find out why he has been able to survive his sex, drugs and rock ‘n roll lifestyle.

Cofactor, a two-year-old company led by President and Chief Technology Officer Dr. Jarret Glasscock, will create a map of Ozzy’s genetic makeup using an Applied Biosystems sequencer from Carlsbad, Calif.-based Life Technologies. Cambridge, Mass.-based Knome (pronounced gnome), which has run the genome of several celebrities for a PBS series, will provide the interpretation and data analysis.

Cofactor will start the tests within the next eight weeks and perform the work for free. Ozzy approached Knome, which charges about $65,000 to analyze genome, about wanting the service done as research for his new health column for the Sunday Times of London.

Cofactor raised thousands of dollars from California angel investor Jerry Dow to help buy the startup’s first sequencing machine, which usually run about $500,000. Since then, the company has performed 500 projects, mostly for researchers and geneticists. Cofactor brought in $2.5 million in revenue in 2009 and now has a staff of eight.