If you have been around in the medical records business a while there’s no doubt that you have heard of Centricity as it has been around for years and one of the early software programs.  GE has both hospital and ambulatory software available and now with the new web based service there’s no server to worry about in the office.  Last year they purchased another vendor and have worked to integrate the software into the Centricity portfolio of services 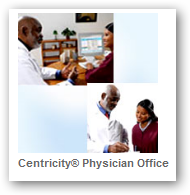 vendors charge today, again depending on your configuration and how many physicians in the practice.

I looked on the GE website and did not find any additional information at this point but I’m sure something will be added shortly.  BD

GE Healthcare is often associated with e-medical record and other clinical information systems used in hospitals and larger healthcare facilities. But the vendor Tuesday introduced for small, independent doctor practices a new Web-based, cloud version of its Centricity EMR software.

While GE has for years offered to doctor practices ambulatory care versions of it GE Centricity EMR software -- which is popular in many large hospital settings -- the new Centricity Advance is a new "plug and play" option for small physician practices.

The new version is "a flexible" hosted system that can be implemented quickly so that doctors can prepare for the meaningful use of health IT financial incentives that begin in 2011 as part of the American Recovery and Reinvestment Act's HITECH legislation, said Corrigan.

Centricity Advance software has been under development for a year with EMR vendor MedPlexus, which GE acquired last Marc

GE says the new software often can be up and running in many physician practices in about four weeks, including implementation and training time.