Home » Insurance » Medically Related » Other Items of Interest » Technology » Quest for Safety, Cost Cutting, Outsourcing and Declining Incomes – What Healthcare and Aviation Have In Common

Quest for Safety, Cost Cutting, Outsourcing and Declining Incomes – What Healthcare and Aviation Have In Common

We always talk a lot about what the 2 industries have in common and it turns out that both can learn from each other, but when you take a deeper look into the

drive for profits and cutting costs have, people die.

I think we all remember the crash in Buffalo where everyone died in a jet stall, and this was human error.  If you have the time, watch the entire Frontline video, it last about an hour.  You can hear about how Continental was outsourcing flights to save money by having a regional carrier fly the routes and the entire time most passengers didn’t know the difference.  Training time is cut back and some of the first officers are making 20k a year.  They fly tired and have to locate to handle their assignments.  We have quite a few regional carriers and just as healthcare outsources so does aviation.

One item in the video they talk about is mentoring, which I talk about frequently in healthcare, we have no idols or mentors, and that really goes for doctors and patients alike with each having their areas of concern and trust.

Also similar is the fact that old established pilots are doing better financially than those starting out, same thing in healthcare with new doctors, so we seem to have 2 professions that are on the breaking edge here with new employees.  There’s a new documentary out about young doctors called the Vanishing Oath and you can read a prior post here and listen to the young doctor working at Blockbuster so she can afford health insurance.  The trailer below on “Flying Cheap” tells the young pilot side of the story.  We all remember Captain Sully, well he lost a ton of his pension and retirement but also had a very experienced person in the other seat.

Here’s the link to the full video on “Flying Cheap” and the trailer is below.  The major airlines created the regional industry to help them save costs.

Now the next item on the agenda is the FAA upgrade on their air traffic control system, NextGen. When you stop and think about it, this is the aviation world of transitioning over to a new electronic records system, lot of things are similar with different company software systems coming together to integrate.

Both industries are struggling and pay for performance is alive in both areas, pilots and doctors working when tired.  The regional airline doesn’t get paid until the flight is completed so we have another issue here too, are the pilots going to get paid when weather creates a cancellation.  Many have a 16 hour scheduled day.  Regional crash of flight 3407 was the Continental flight.  The FAA is calling for an added sense of corporate responsibility, same thing we are looking for in healthcare and at the FDA.  BD 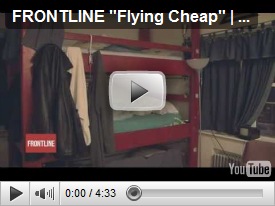 The Federal Aviation Administration needs to do more planning in order to ensure that NextGen, its long-term air traffic control system upgrade, is successful, the FAA's inspector general said in a new report.

The report, requested by the House Committee on Transportation and Infrastructure, says that the FAA needs to take a number of steps before it moves from a planning to an implementation phase of its two-decade, multi-billion dollar project.

The report also recommends FAA improve partnerships with other agencies, such as NASA, and with the private sector, in order to help plan and develop policy in regards to NextGen. It implies that these partnerships, as of today, leave something to be desired.