This is a little different from how we pretty much recognize Nuance with their expertise in speech recognition and the software from ShapeWriter is geared for touch screen use, both with mobile phones and with tablet computers.  As you can see below most mobile platforms are covered with software applications.

Being a continuous touch application, this means you move your fingers or stylus from one area to another for entry without the standard keyboard punch, like shorthand.  BD

Shape writing is the next step in the evolution of touch-screen interactivity. ShapeWriter's cutting-edge text input technologies make using these devices easier, faster and more enjoyable than ever before. Manufacturers can now create innovative new products with ShapeWriter serving as a reliable partner. “

The speech-recognition and imaging software giant (NASDAQ: NUAN), based in Burlington, MA, has acquired ShapeWriter, a Silicon Valley-based spinout from the IBM Almaden Research Center, for an undisclosed sum. Nuance has not spoken publicly about the acquisition, but a message on the ShapeWriter website as of yesterday reads, “ShapeWriter, Inc. is now part of Nuance. The ShapeWriter continuous touch application has joined Nuance’s portfolio of patented text input solutions recognized as the industry’s leading predictive text technology.” E-mail messages sent to Nuance’s media representatives this morning were returned, but the company hasn’t commented on the deal yet. 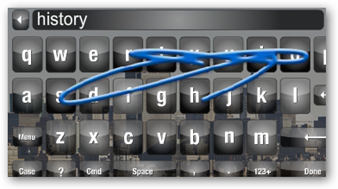