Microsoft HealthVault continues to grow and recently in the news the services became available to consumers in Canada too.  The UK has their own portal, separate from where we go in the US and if you live in the UK you can find the site and sign up here. 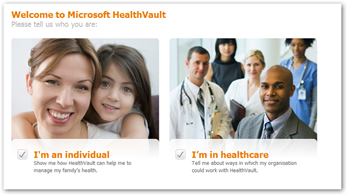 the past I have posted about the Common User Interface, which is also at CodePlex and is a project for developers to work with to create a unified front end screen application for medical EHR records, what  a grand idea to have same/similar screens everywhere.  I think it’s a good idea and it runs Silverlight and more information can be found on that topic below.

Right now there are no plans in place for aggregating and integrating with the NHS system and I’m sure down the road as systems develop we could hear more on that topic as things are a bit up in the air in the UK with their current system with various security and other issues to be addressed, which is project #1 when it comes to healthcare records online.

Dr. Crounse over at the Microsoft HealthBlog also has some additional information on how HealthVault all came together in the UK and you can read more at his blog and at John Couthard’s Blog at Microsoft.    BD

Microsoft has launched its HealthVault cloud-based health-organizer platform in the UK, nearly three years after its US launch in October 2007.

The platform is designed to allow organizations to develop applications that let individuals monitor various aspects of their physiological performance, based on user-supplied data such as body mass index, blood pressure and heart rate.

"HealthVault is aimed at the 13 percent of the UK population who are actively engaged in monitoring their wellness," Dave Coplin, Microsoft's national technology officer, told ZDNet UK. "We wanted the right kind of data store."

Microsoft has provided a software development kit (SDK) for developers based on Microsoft's .Net platform. For open source and developers on different proprietary platforms, Coplin said that HealthVault had a set of application programming interfaces (APIs) available on CodePlex, Microsoft's open-source repository, which would allow coders to develop on languages including PHP and Python.

Microsoft has no plans to allow information exchange between HealthVault and NHS systems such as Summary Care Records, which hold patient medical information. In addition, Microsoft said it would not at present integrate HealthVault with the NHS health organization suite, HealthSpace.

The cloud platform will be hosted in the UK at the same datacenter as used by government organization the Child Exploitation and Online Protection Centre (CEOP), said Coplin. Under European data protection law, citizen information must not be sent outside of Europe without consent. The UK datacenter is administered by UK technology company Attenda.

Coplin said that Microsoft had not discussed HealthVault with the new government, but had been talking about decentralization of services