According to the article, it does not break the skin, but it is there and at the bottom of this post there’s a link to You Tube to show how it works.  I try and keep

things non offensive here, so you can use the link and see more details on how it works.  An added plus here too is the fact that it could save women the chance of contracting a sexually transmitted disease.

You can also visit the website for more pictures.  The article says the price for each one is around $2.00 when they come on to the market.  They are now being tested at the World cup.  One thing I do have to say though is if someone shows up with one at a doctor’s office or hospital to be removed, there’s no doubt on what was happening.

Actually it’s kind of a shame it’s gone on to this, but it’s better than the alternative.  Once the device is attached the man can’t pee and can hardly walk and if one tries to remove it on his own, it gets tighter.

The doctor who invented the condom is female.  BD

Ehlers, of South Africa, has seen firsthand the devastating effects of sexual crimes against woman and has been driven for the past 40 years to help find a way to put an end to this kind of violence.
Ehlers thinks she may have not only found a way to dissuade would-be rapists from carrying out an assault, but might have to the key to helping police nab such assailants. 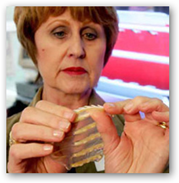 This is where Ehlers' anti-rape condom for women, Rape-aXe, comes in. The prototype for this female condom debuted in 2005.
Elhers is now distributing the inventive condoms in certain South African cities where World Cup games are taking place, according to CNN.

According to Elhers' website, the Rape-aXe condom "consists of a latex sheath, which contains razor-sharp barbs. The device is worn in (the woman's) vagina like a tampon. When the attacker attempts vaginal penetration the barbs attach themselves to the penis, causing great discomfort. The device must be surgically removed."

As the doctor explained to CNN: "It hurts, he cannot pee and walk when it's on," she said. "If he tries to remove it, it will clasp even tighter... however, it doesn't break the skin, and there's no danger of fluid exposure."

An illustration of how the Rape-aXe system would work was posted on YouTube (WARNING: the video may be considered graphic for some viewers).