As I understand reading this article there is a “pool” to be distributed of a billion dollars here worth of tax credits to help small stat up biotechs stay alive.  The amount each company can get will depend on the number of applications and those awarded.  For small companies focusing on cancer cures that are deemed “high risk” from investors, as we all know Wall Street is not very patient with the times required for research and development and wants “instant” results which are just not there today as we saw in the past with blockbuster drugs as genetics have entered the picture.  It takes a lot more time to develop a drug therapy today as we 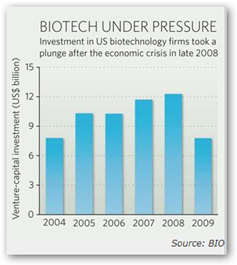 have information and technology to use that did not exist in years past.

As noted in the article, the time frame given is 30 years to give you an idea on projecting a time for a cure to be produced.  You can also read in the news everyday about big pharma not financing research and development to the degree they have in the past as not everyone is going to produce a “winning” candidate.  There are stories of many biotechs that fold up and go away due to lack of funding, some having failed technology and products, while there are others who have something perhaps worth continuing and sometimes get lucky and are purchased by a larger company.

As most mentioned in this article is is not a “fix all” but can certainly help out with hopefully keeping biotech on track to finding cures.  For the investor side of the puzzle the numbers certainly appear to reflect the skepticism with riding a multi year wave before cures and medications actually are brought to market.  BD

Tucked away on page 759 of the voluminous health-care law signed by President Barack Obama in March is a provision to aid small companies doing research and development (R&D) in biotechnology. Starting on 21 June, many of those companies will be racing to take advantage of a tax credit worth up to $5 million per company and totaling $1 billion.

Called the Therapeutic Discovery Project Program, the initiative aims to lift an industry that has struggled during the recent economic crisis. When anxious investors shifted money to low-risk investments, high-risk biopharmaceutical companies, particularly young firms with no products on the market, were left scrambling for cash (see graph).

To be eligible, a project must demonstrate the potential to produce new therapies, reduce the cost of health care or contribute to the goal of curing cancer within 30 years. GlycoMimetics of Gaithersburg, Maryland, is one potential candidate for the credit. Rachel King, the company's chief executive, hopes the money could be used to expand clinical trials for its drug to treat sickle-cell anemia. XOMA, a firm in Berkeley, California, will probably submit multiple applications, each for a different project, says its chief financial officer, Fred Kurland. One project XOMA is likely to put forward is its lead therapeutic — an antibody that reduces inflammation.

Under the program there is no limit to the number of projects that can be funded at a single company, and the $1 billion total will be distributed among all qualifying projects. Eisenberg estimates that about 600 of BIO's members will apply for funds, plus about 600 companies that are not part of the organization. This deluge of applications could lead to smaller awards per proposal.

Even so, the credit is unlikely to solve the real challenge facing the sector: how to sustain a high-risk industry that often takes a decade or longer to generate a viable product. "This is not going to solve any long-term problem," says William Caldwell, chief executive of Advanced Cell Technology, headquartered in Santa Monica, California. "It's just going to be part of the funds that a company can access just to stay alive."

US biotech firms line up for tax credits : Nature News