This is interesting to know that premium payments in New Jersey might be going to support a blimp to fly over and advertise.  The purpose of this article is to question and take on CEO compensation while laying off other individuals.  Layoffs in health insurance though are for the most part due to automation taking the 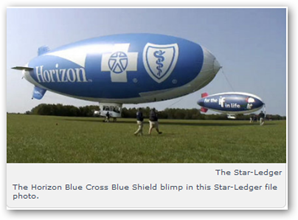 place of jobs that humans do.

The question with Horizon Blue Cross is the gray areas of being for profit or non profit.  They are listed as a non profit but have paid some taxes so state legislators are taking a look at the big compensation packages being given.  One small note on the blimp, it takes a ground crew of around 13 individuals to launch and bring the blimp down for landings.  This I learned from the rides in the past on the Goodyear blimp and blimps have an operating budget too.  BD

TRENTON — At a time Gov. Chris Christie’s administration is limiting how much public money can be spent to pay CEOs from nonprofit social service agencies working for the state, one prominent senator today proposed giving the same treatment to the executives at New Jersey’s largest health insurance company.

When compared to a Fortune 500 company of similar size and revenue — Horizon employs 4,700 and made total revenues of $8.3 billion — that CEO earned $14 million last year, Horizon board member Aristides Georgantas said.

During the hearing at the Statehouse in Trenton, Horizon officials said 200 people were laid-off while paying out about $30 million in bonuses to a wide range of employees last year. The layoffs saved the company about $15 million, officials said.

Sen. Fred Madden (D-Gloucester), said the layoffs could have been avoided. "You would have still have had enough money for bonuses,’’ he said.