What can being over weight cost you?  In this case it was a seat on Southwest Airlines.  The entire issue started when Mr. Smith was allowed to take an earlier flight, as on his scheduled flight he had booked 2 seats and thus I am guessing he may have done that in good faith due to his weight.  When he moved up to the earlier flight, well there was only one seat, so some BMI and weight issues entered here with someone enforcing the company policy.  Southwest since this time has 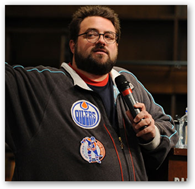 Mr. Smith took right to Twitter to announce what had happened to him.  He also indicates that he could buckle the seatbelt and that the arm rests could come down and that his body was not in the way, as the policy dictates. "Dude, I know I'm fat," Smith said.

He continues to contest and brings to the light the fact that their policy was not violated and that he felt an employee who perhaps doesn’t care for him decided to take some initiative to enforce policy so I guess in this case fat did not fly.  Obviously the loss of a few pounds can help to avoid future occurrences, but maybe that’s something he might want to figure out on his own.  BD

Los Angeles, California (CNN) -- Southwest Airlines apologized a second time Monday to film director Kevin Smith for pulling him off a Saturday flight because of his size.

"We're very sorry for how his night unfortunately played out," Southwest said in a written statement.

The airline said it "could have potentially handled our communication better," but defended "the determination that Mr. Smith needed more than one seat to complete his flight comfortably."

The "customer of size policy" implemented 25 years ago requires "passengers that cannot fit safely and comfortably in one seat to purchase an additional seat while traveling," it said.

"If a customer cannot comfortably lower the armrest and infringes on a portion of another seat, a customer seated adjacent would be very uncomfortable and a timely exit from the aircraft in the event of an emergency might be compromised if we allow a cramped, restricted seating arrangement," the airline said.

"I'm flying on the welfare airline, food-stamp airline," he said. "So I think I can indulge myself with two seats, and I can afford to do it."