Hospitals continue to struggle with the balance of commercially insured patients with those who are under or not insured.  The 2 recent posts are examples of how hospitals are working to further efficiencies and maintain lower costs.  Hospitals have fixed costs in many areas, some of which can’t be changed without sacrificing

If you work with a Tenet Hospital, it looks like some possible changes and upgrades could be on the horizon.

The benefit of the contract is to allow Medicare Advantage plan members to use additional in network services.  There’s a group called “Tenet Physicians” and they come into play here too under the contract.  There’s about 400 of them and some of these could possibly be some of the hospitalists you see at their facilities.  Last year the Texas Medical Association created a video on what happened at a hospital where the ER physicians were fired as the facility was trying to get more admissions.  Hopefully we won’t be seeing more of this type of activity as the pressure on hospitals continues to mount. 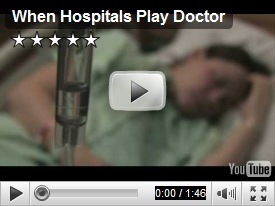 Relief is going to have to come from other areas in healthcare soon, as there’s only so much hospitals can cut and remove from patient care offerings and unfortunately it’s putting administrators and physicians at odds, battles that are created where perhaps they really should not exist.  Certainly much of the prescribed care is in the hands of the physicians and I think most are aware of cost today with hospital medicine, but can they be expected to go against their methodologies of helping and treating patients?  The fact that more non insured and under insured patients is not a problem the doctors created, it’s all about the health insurance companies and their need to create profits in the form of dividends taking priority over perhaps working as a non profit where some of those funds could be reinvested in better technology and care.  BD

NEW YORK (Dow Jones)--Tenet Healthcare Corp. (THC) led the hospital sector lower Tuesday, as investors worried about what the company's decline in fourth-quarter admissions could mean for its peers.

Hospital stocks' declines Tuesday were an overreaction in Skolnick's view. She noted that investors tend to be skittish about this space due to a combination of the companies' general exposure to the uninsured, the economy and Washington