One of the real pluses we have in California is a Governor who is “hands on”, uses technology and shares via new technologies with citizens.  He does his fair share as 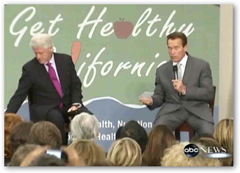 far as getting it out there, so if you want to partake, learn a few new skills on your computer and I think you will be amazed at how it works and how efforts to keep all informed are great.  I don’t see any other Governors in the US doing this.  Because of his active participation in technology, he doesn’t need someone tell him that the California infrastructure needs some serious updates.  He gets it.  Too bad more politicians don’t get this.

He was also considered a leader at the Governor’s Conference in Washington DC, and again his use of technology was great as he took a few minutes to “Tweet” a couple pictures.  It only takes a minute and by something as simple as this he keeps citizens involved and watching.  Again too bad the rest of the politicians haven’t figured out yet.  That’s why we have this big issue going on today with the Healthcare meeting.  When he leaves office I think we will miss him as we will probably end up with someone who won’t do this sort of communicating and not see the value.

Whether it is healthcare or other issues, if you don’t participate, you create frustration, anger and a lot of extra work for others.  Last week I had a few moments to speak with a pediatrician at Kaiser Permanente about how she approaches obesity and healthcare with children and wouldn’t you know that electronic records and new technology fit right into her schedule too!  You can read the interview here and see what Dr. Richards had to say.