Home » Medically Related » Other Items of Interest » It’s A Fat World After All (video) – How Many Pounds Per Cubic Foot Are You?

It’s A Fat World After All (video) – How Many Pounds Per Cubic Foot Are You?

This is a bit of a funny/satirical video and after many years in logistics, that’s how we calculated cost, the density (no pun intended) and how much space the freight took up.  Cargo airlines have been doing this for a long time and now it’s moving right along into the passenger side.

In the future you could be given a code that identifies how you calculate out on pounds per cubic foot I imagine.   In the cargo business the companies also project and have to balance overall weight too, in other words in a 28 foot trailer where 22,000 pounds is the limit, you can’t put 20 of that in the head of the trailer and 2000 in the back, it would be off balance so a mix is important there too.  It’s in the cube.

Now David from the Los Angeles Times states there will be a fat section, so again using balance of weight, which is important as the fat folks will need to be scattered among all the seats as again you can’t have too much weight in one area.  If you have ever been up in a blimp for example, weight is very important and sand bag are adjusted around the distribution of people on board.  When in sales years ago and taking clients up for a ride on the Goodyear blimp I really had to get personal and ask their weight ahead of time as it only holds 6 people, unless some are pretty heavy in weight, then only 5 could ride.

This is actually somewhat funny to hear too that Disney had a problem with the boats bottoming out at Disneyland, same issue.  This video may have some points on airline flying in the future.  BD 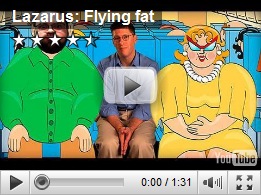 Fat sections?! Bigger seats? I think it's called first class, The﻿ seats are twice the size of coach and you get a decent mean as far as airplane food is concerned.