We have probably all chuckled a bit as this being a way to go, but it doesn’t have to be as in Switzerland they are taking the matter seriously and ordering 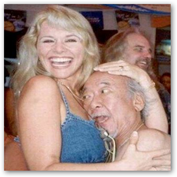 defibrillators to be on available at the brothels and sex clubs.  A couple years ago in Orange County, California they made it the law where fitness clubs are supposed to have them and the results of compliance have been less than anticipated.

The article mentions on death where an anti-impotence drug was used, so now we have to think about drugs, sex and your heart rate all at one time.  It makes me think of all those ED commercials that tell one to “ask their doctor if they are healthy enough for sex”, and what would they do if their doctor said no (grin).  Well in Switzerland they are taking the idea of have defibrillators seriously as they want clients to be safe, well that is at least in the cardio department.

Brothel owners in the Lugano area say electric shock treatment to restart customer's hearts is needed because so many elderly customers are using their services.

The most recent victim was a pensioner, thought to be having fun with the help of anti-impotence medication.

His death followed a series of other incidents, some fatal, in which heart attacks have claimed brothel customers in the area.

The owner of one sex club said: "Having customers die on us isn't exactly good publicity".

There are now 38 sex clubs and brothel in the Lugano area. And more are planned, according to Italian daily, Corriere della Sera, in order to accommodate the thousands of customers who pour over the border from Italy, where brothels are illegal. Around 80 per cent of the men who pay for sex in the area are thought to be Italian.

Local health experts are said to have backed the plans to stock defibrillators in sex clubs and brothels.

According to the British Heart Foundation: "Modern defibrillators are becoming increasingly quick and easy for the lay person to use, which can mean the difference between life and death".