For those using healthcare software on Apple, this appears to be an indication that you may see more developments in the future.  Macspeech already exists and 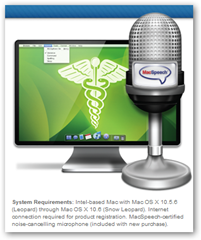 based on what I have seen with acquisition with Nuance in the past, things seem to move upwards and further options seem to come along, which is good for us users.

The company has several versions to select from and the advantage of choosing a medical solution is the vocabulary, in other words most frequently used words are already loaded versus having to train each word.

Is there anybody else in speech recognition today besides Nuance?  The last couple of years had shown quite a number of acquisitions for the company, many in healthcare technologies and MacSpeech has already been licensing the speech technology from Nuance so it appears this makes sense today to come under the umbrella.  BD

Nuance Communications announced Tuesday that it has bought MacSpeech, a company that provides voice dictation and recognition software for Mac  users.

Seeing MacSpeech's experience with the Macintosh environment and its users, Nuance sought out the acquisition as a key opportunity to expand into the ever-growing Mac market. The company said it plans to bring its Dragon name, recognition, marketing, and R&D to the MacSpeech line of products to further grow their market share among Mac users. MacSpeech already licenses the Dragon speech technology engine for its MacSpeech Dictate software.