I thought this was somewhat humorous and ridiculous at the same time.  Here we are again looking at cost on drugs versus stents and there needs to be an open path to have both available.  Why don’t they tackle why stents are so expensive as the companies are so tied up in fighting patents, and other legal areas, it all gets passed down to us.  This announcement didn’t impress me in the least and now you read about Boston Scientific laying people off.  Get a clue!

J and J Gets 1.7 Billion Wins Battle, Doctors, Hospitals and Patients Lose on the High Cost of “Legally” Patented Stents

This is just one example of many.  Did you know that due to the cost of stents that many hospitals cannot pay for them upfront?  Instead the stent manufacturers put them there “on consignment”, in other words there’s no charge to sit on the shelf until the stent is used.  This is one example of some of the cost cutting efforts hospitals are having to make today, as their costs are fixed in many areas like this, they need to have the stents available. 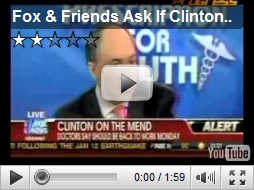 So with this lawsuit reward somebody has to pay and it’s us, and we have tied the hand of one other company who develops stents with cash flow issues.  If I were J and J on this, I would maybe consider some big donations to helping healthcare after this announcement.  We pay the price for “legally patented” stents that are approved by the FDA long before this nonsense takes place.  Sure a settlement may be in order, but for goodness sakes this large?

Ok J and J, start donating some free stents for those who cannot afford them with this big landfall of money and for the folks in this video, start working on some constructive priorities, your disruption is not doing anybody any good other than adding to the ridiculous chatter on the web.

Have a chat with J and J and see if perhaps something nice can come out of this stockpile of money.  BD

This morning, Fox & Friends covered President Bill Clinton’s hospitalization by asking if the President would have been treated for his heart problems “if the health care reform had gone through.” “Would he have gotten those stents?” host Brian Kilmeade asked in-house health reform expert Peter J. Johnson Jr.