Home » Medically Related » Pharma/FDA News » FDA Says Ear Candles Are Not a Good Idea – Is This A Cult?

FDA Says Ear Candles Are Not a Good Idea – Is This A Cult?

This one was a new one for me too, I had never heard of sticking a candle in your ear!  Some were stating that it helps heat up and remove ear wax, well one person got stuck with candle wax on her ear drum, so much for that idea.  You could even possibly lose your hearing doing something like this. 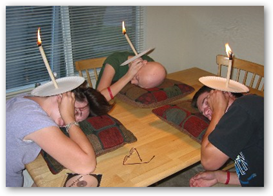 I read where the trick to this is to supposedly creates a vacuum that draws wax an other debris from your ears.  There are all kinds of other claims as well that it can relieve headaches, sinus and ear infections, and of course cure cancer, so you kind of get the idea where this is going.  As mentioned below there is potential damage with burns too, so who in their right mind would even give this a second thought?  It’s a strange world we live in and we have seen people gather and sit in bit sweat teepees too, and as we all know that is not safe either.  BD

Does sticking a burning candle in your ear sound like a good way to remove ear wax or cleanse your blood of impurities?

Many consumers are apparently trying this procedure -- often called "ear candling" -- because of claims that it can do everything from remove toxins in the ear canal to cure cancer. But federal health officials warn consumers not to use these products, saying they can cause burns and other serious injuries.

Ear candles are hollow cones about ten inches long made from a fabric tube soaked in beeswax, paraffin, or a mixture of the two. Companies that make these products claim that burning a candle in the ear creates a vacuum that draws wax and other debris from the ear canal.

But the FDA said consumers who have used ear candles have suffered burns and perforated eardrums that required outpatient surgery. These injuries happened even when consumers used the ear candles according to the manufacturer's direction, the FDA said.

A report on the Web site Quackwatch, titled "Why Ear Candling Is Not a Good Idea," cited many injuries associated with the practice, including external burns, ear canal obstructions, and perforated eardrums.

Stick What in Your Ear?