Mexico is also becoming a popular alternative for Medica Tourism, and they have the closest locations for those of us living in the southern half of the country.  Also, notice the mention of insurance companies who cover treatments there.  In reading this article though, it states that they prefer “cash” for payments as when they do honor our US insurance companies, the delays to get paid, well, are somewhat like what some of us go through here.  Amazing, they don’t like our payment 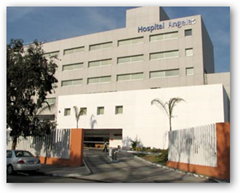 system either.  When I attended the World Healthcare Tourism Conference I spoke to a couple medical organizations from Mexico.  You can read the entire article at the link.

The one group I spent a lot of time with talked quite a bit about patient convenience items, in other words putting everything close by to make travel for surgery as easy as possible.  These are hospitals being built for tourism at the forefront, not that they are not available for their own citizens, but even with the cheaper prices they are still out of reach for some of their own citizens.  If healthcare reforms doesn’t create some major changes with affordable Mexico, they are telling us to come on down, and please bring cash if you can, we deal with insurance companies but the payment time is just too long.  The picture here is a fairly new hospital in Tijuana and the hospital group website states on the website they have 15 facilities and 10  more coming in the next 5 years.  Something also that caught my attention on the site is the PayPal insignia, I guess PayPal does healthcare now too.  BD

Carefully observing the changing demographics of US society, Mexico's federal government is wagering that the graying of Gringolandia will give a strong impulse to medical tourism. "A million baby boomers, as they are called in the US, could come to live in Mexico in the coming years," said Mexican Health Minister Jose Angel Cordova Villalobos at an event held earlier this month in Mexico to mark National Nursing Day. An opportunity exists, Cordova said, for tourism promoters to sell not only sun and sand but also "treatments or surgeries."
In coordination with other federal agencies, the Health Ministry plans to build up the medical tourism infrastructure during the next two years. Important components of the initiative include training a corps of bilingual Spanish-English nurses, and increasing the number of private Mexican hospitals accredited by a joint US-Mexico commission already at work. According to Cordova, eight such private institutions have been certified under the commission's standards.

A big factor will be the outcome of so-called health care reform in the US, especially if legislation is passed that increases rather than lowers costs as the Obama administration proposes.

Still, coincidental visits to the doctor or dentist are increasingly important in tourist destinations like Puerto Vallarta. For instance, Cortes estimated his patient load consists of 50 percent foreigners and 50 percent Mexican nationals. In Puerto Vallarta and elsewhere in Mexico, sick tourists from the US will discover that medical costs are far cheaper than at home. According to Cortes, office visits hover around $40, while x-rays costing as little as $40 can be turned around in less than 45 minutes.

The companies include Cigna, Aetna, Tricare and International Health Insurance of Denmark, among others. The hospital advertises birth delivery for about $700 and hysterectomies for approximately $1,000. The prices include one and two night hospital stays, respectively.