This is not syndicating the program, it is having a doctor in the same format talk show like Dr. Oz so China will have a Chinese Dr. Oz.  The show’s format has been packaged in a model that should fit in any society the article states. 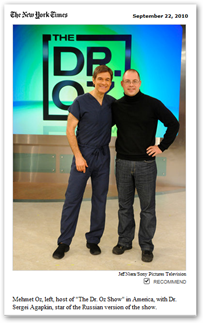 Dr. Oz stated he met the Russian Dr. Oz even before his show began.  In other Dr. Oz news he’s teaming up with Walgreens to promote flu shots this week.  Almost every retail chain store and retail clinics will have a full stock on hand it appears as everyone seems to be competing for the consumer traffic on flu shots this year.  BD

How is this for expanding an audience? The program known in America as “The Dr. Oz Show” is about to welcome an additional 876 million potential viewers.

Sony co-owns the show — and all its international expansions — with Oprah Winfrey. She discovered Dr. Oz and made him a frequent guest of her own talk show before building this format around him. They began pushing to sell the format rights internationally even before the show began its run on American television. “I met the Russian Dr. Oz before we were on the air,” Dr. Oz said.

The Russian show, which began appearing in April, is already a hit, Mr. Abrahams said, so much so that the broadcaster, Rossiya, has ordered 175 new episodes.

“The main reason these shows work” in any locality, he said, “is if you give people that much of a recipe, they can fill the pie.” Any American who happens to stumble onto the Chinese version will surely see familiar sights, Dr. Oz said.