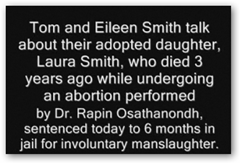 The MD did not have the resuscitation equipment, and was not certified for cardiopulmonary resuscitation.  He also failed to monitor her vital signs and as the video states the doctor did admit his guilt in this unfortunate loss of life.  He received 30 months in prison but will serve only 6 months.  He stopped practicing medicine 2 years ago and when the case came up it they found out he had tried to update his office after the fact to prove he had the necessary equipment, that is sad.

The board also found he didn’t call 911 fast enough either when complications arose.  BD

BARNSTABLE — She arrived at the Smith household almost 18 years ago, a small raven-haired girl with tattered and dirty clothing, a black eye, and all her possessions in a plastic grocery bag, except for the doll she held in her hand. Tom and Eileen Smith wrapped the neglected, abused, and abandoned girl with their love, only to lose her later to a botched medical procedure.

By all accounts, Laura Smith lived life to the fullest, according to her family and friends.