Through a computer, all the dummies can be programmed as to how much urine to release for one example and the picture below shows a room of dummies where

nobody dies.  The new facility was financed through private philanthropy, debt and school resources.

In the news too recently is that all medical school students received IPads too so those will fit right in with the state of the art facility.  Not too long ago the school did a nice video showing more about how they are working with simualtions.

Now that you have gone this far, check out a little humor from Stanford medical students.  BD

There's no pulse, no consciousness -- but no panic among the young doctors. That's because they've practiced this moment before, on this same plastic patient, a bionic mannequin named Lee Majors. And each time, they get better.

"He's a patient with patience," said Kam McCowan, an engineer with Stanford's new Center for Immersive and Simulation-Based Learning, a mock hospital floor that is one of the largest and most advanced medical facilities of its type in the world.

Just a block away from real life-and-death drama at Stanford's hospitals, the simulation facility is part of the $90 million Li Ka Shing Center, christened on Wednesday. 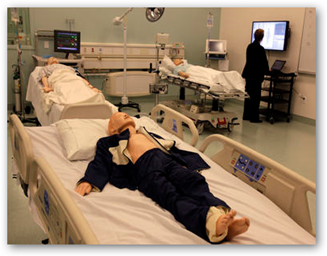 The center's $60,000-$90,000 dummies are so sophisticated that they can be programmed to discharge too little urine, or too much. They may tremor, sweat or bleed. Monitors may show they're suffering from diseases including pulmonary edema and hypertension.