It’s the same old story with counterfeits, whether it is in India or here in the US, they are everywhere and with the global economic structure we have today, counterfeits travel everywhere too, just like the real drugs.  We see this ads on the internet all the time and unfortunately when someone’s life is at stake it is sad to see someone only out there trying to make a buck.  India has grown up in a hurry if you look back 20 years of where they were then and where they are today with such such growth at such a rapid pace, they go through a bit of what we have here too, 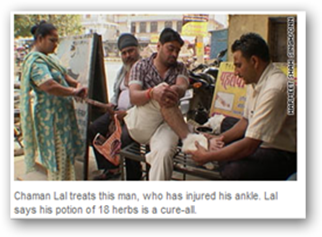 policing all of this as the counterfeiters are working just as hard as the legitimate folks to make money.

Back in October of 2009 I did a post about “roadside street doctors” in India and “ScanMan”, a radiologist in India who read the Medical Quack was quick to confirm this via Twitter saying that it is a huge problem.  We would not think of something like this existing here in the US, but outside our parameters and borders, things operate sometimes with little or inadequate enforcement and patients and consumers are hurt by this.  Actually ScanMan wrote back and said using bar coding as I have suggested was the most exciting technologies with using Microsoft Tags (bar codes-see below) he had seen in a long time, and liked it a lot!

What is particularly disturbing here is to hear one individuals quote on how he feels he’s not hurting anyone with the counterfeit drugs, but he doesn’t look at the other side of the coin as he feels if the counterfeits don’t work he has not poisoned anyone, but in fact he has as recover relies on the effectiveness of a drug to cure.

This also just kind of gives me more fuel to keep pushing my campaign for bar codes on medical products and devices.  As mentioned there’s one company that sends a text message to tell the consumer the drug is real, but I think with what we have today that might be a bit dated. 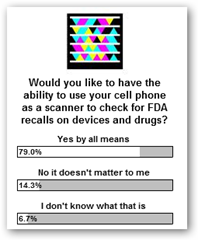 With encrypted gateways for bar codes, we can police this a lot better today and have encrypted tokens inside the bar codes too.  There’s no perfect solution of course, but if you want to read up, take a look and see what you think.  The US FDA could maintain a synchronized data base with alerts too that would make compliance easier and have the capability to look for counterfeits trying to connect through the gateway with a sophisticated audit trail, in other words let’s make it difficult for the folks selling fakes out there.

As a cloud operation, other countries could also choose to connect so this could be done internationally in time, and yes it’s a big project but the technology is here and available.

Sure there’s a lot of other technologies in the works to detect the pills inside the bottles too, but we do need something quick easy and simple to help protect consumers, hospitals and doctors and assure the pharmacists they have “real” drugs in their possession and have not been scammed.  If the scan does not connect, the consumer knows there’s an issue and on stolen merchandise a message via the lot numbers could potentially show too that one is in possession of stolen merchandise.    Sure there would be counterfeit attempt here too but there’s new tools at “mission control” to thwart some of this too.  BD

brand names listed on the boxes of cough syrup, supplements, vitamins and painkillers sprawled across the desk and shelves in his basement office.

"They look real, but all these are fakes," said Sati, head of a New Delhi-based agency that helps police conduct raids against counterfeit-drug syndicates across the country. "A regular customer cannot make out if a drug is fake. . . . The biggest giveaway is when someone is selling medicines very cheap. It is almost always fake.

India, the world's largest manufacturer of generic drugs, has become a busy center for counterfeit and substandard medicines. Stuffed in slick packaging and often labeled with the names of such legitimate companies as GlaxoSmithKline, Pfizer and Novartis, the fake drugs are passed off to Indian consumers and sold in developing nations around the world.

The tricks of the trade include sticking fraudulent labels on expired products, filling vials with water, stuffing small amounts of real ingredients in packages of popular licensed brands and putting chalk power in medicine packets. In June, officials at Nigeria's Abuja airport caught a shipment of fake antibiotics, containing no active ingredients, with a "Made in India" label.

One company, MSN Labs, is using a technology developed by U.S.-based start-up firm PharmaSecure that allows consumers to check the authenticity of medicines by sending in a text message of the code written on them.