The physician’s group from Oregon is on their next road show starting this week in several cities in California.  They are advocating a single pay system and based on

what we are seeing today, it’ might be looking a little better and who knows we could end up there by default. To have a true “single pay” system though I might think it would almost require a “Roosevelt” type of decision since some Medicare contractors are owned by insurance companies and thus there’s a big chunk of revenue I’m sure that would not want to be missed, as the insurers have the technology and the data on our health and insurance claims, not the government.  Some carriers also own some of the anti fraud algorithmic companies that provide services that scrub claims, audit, etc. so as a company if a carrier is gaining big chunks of transaction revenue, where’s the incentive to stop fraud as there goes that money and perhaps some heads turn in cases of such.  If the fraud is stopped, well bye bye to the transaction fee income so maybe some incentives here need a new model?   The algorithms are still running as usual.

Mad As Hell Doctors are physicians and other advocates who in August 2009 decided that we were indeed mad as hell about the cruel and inefficient system of health care that we have in the US.  Last September, as the healthcare debate raged in Congress, we embarked on three week road trip through the heartland of America, speaking at single payer rallies and town halls in churches and union halls,  universities, public parks and arts centers in 30 towns and cities in 15 states.  We attracted 6,000 participants and interviewed hundreds of Americans on camera.  We carried the message of their suffering under our current health care system to our Congress members in Washington, D.C.

With the status of affairs today, this might be very good timing to continue the annual tour.  BD

One Message!  Single Payer or Bust.

We hope to share with you our passion that America must achieve sustainable high quality health care for all as soon as possible. 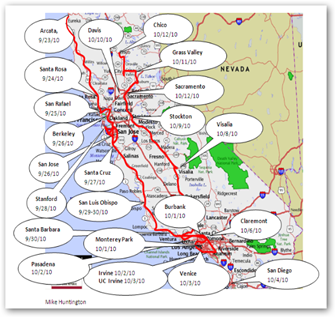