What does STEM and Change the Equation stand for:

Engineering and Math, that’s STEM and working with Algorithms (there’s that word again).

Of course readers around the Medical Quack here the technology end of this all the time and enough about the non participants we have both as citizens and in Congress.

The point of the program with the initial $5 Million dollar grant is to allow more students to engage in robotics (good for healthcare) improve development for math and science too.  Life Sciences is all about math and algorithms.  So far there are 100 CEO members and one of the big leaders is Craig Barrett from Intel.  He’s been beating this drum for years and rightly so as well as current Intel CEO Paul Otellini.

I posted this article back in September of 2007 where Craig Barrett stated we need to get into the education of technology, and here we are at 2010 at around the same place and our leaders don’t offer anything as far as role models, but rather more of a soap opera effect in Washington today, sad.

Here’s a short breakdown of the bullet points highlighted and yes when you look at the third item perhaps we will have students helping Congress on how to create policies some day. 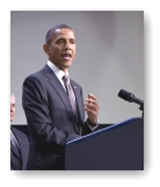 Nature Publishing’s “Bridge to Science” Program for Parents and Scientists:

The programs are to be privately funded and will increase the number of teachers who enter the profession to help with a STEM undergraduate degree.  I found this to be one heck of good step in the right direction and I think it may have been overshadowed this week with all the news insanity of the crazy folks out there in the elections.  When you watch the video you hear Craig Barrett emphasize engineering is one of the key areas for focus, as students with this major will have many choices in which direction they may want to go.

We need scientists as that is where the work lies in Life Sciences to find cures.  If nothing else this article brings home the fact that some smart people are listening and realize what changes are needed as technology is rapidly changing the way we live today and the students and teachers are the future so we don’t end up as a country that gets left behind.  BD

Today, President Obama announced the launch of Change the Equation, a CEO-led effort to dramatically improve education in science, technology, engineering, and math (STEM), as part of his “Educate to Innovate” campaign.  Change the Equation is a non-profit organization dedicated to mobilizing the business community to improve the quality of STEM education in the United States.

The United States is falling behind our foreign competitors in STEM subjects.  According to one, study American 15-year-olds ranked 21st in science and 25th in math compared to other countries.  In his remarks to day, the President emphasized the importance of providing American students with a solid foundation in these subjects in order to compete in the global economy:

Changing the Equation in STEM Education | The White House