We have had our share here in the US and now Germany had a tragedy in one of their hospitals.  An explosion took place across the street and was being attended to and then shots went off across the street at the hospital. The woman doing the shooting was killed by the police.  A domestic issue is thought to be at the root of violence.  The BBC has a video and you can click on the image below to visit the site.  BD 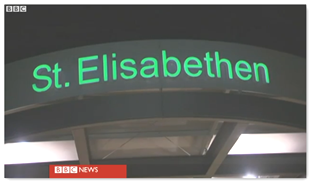 This is what the building across the street looked like that was said to be potentially connected to the shooting spree.  BD 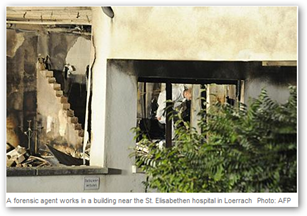 The woman, who was not identified, shot a woman and a child in a flat in the south-western town of Lorrach in Baden-Wuerttemberg.

According to the local Badische Zeitung newspaper, there was a "loud explosion" around 6.00pm local time in a building opposite the hospital. Online photographs showed smoke pouring from the building as firemen raced to the scene.

But the fire brigade personnel were initially unable to tackle the blaze as they heard shots and took cover. Media reports said two bodies were later found in the burned-out apartment and police were on Sunday investigating whether the hospital shooter was responsible.

The Catholic hospital has a center for children, a specialist gynecological unit and an intensive care station for premature babies as well as a psychiatric unit for troubled youngsters.