This is nice news when you get to see how profitable some of the Medicare companies are, such as this example below with profits of a billion last year and looking to go beyond that this year. 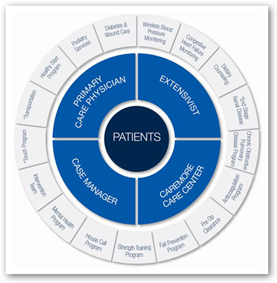 In California there’s one model that uses a little different model with an extensivist who is an outside hospitalist at CareMore.

The company uses all the business model tools for efficiency through Trizetto who is some what of a competitor of Ingenix for their data analysis work.

TriZetto is another data management system owned by a private equity firm in the UK called Apax Systems.  Private Equity firms have not missed on one of the biggest money making and maybe money sucking areas of healthcare as transactions all take a piece of the action and when new software aggregates with other systems, well one transaction fee is added so the pot in the middle gets bigger sometimes while the patient and doctor sides shrink a bit.  With software and building the bigger and better mouse there has to be room to add on more transaction fees, right?  I wonder about that but it is a business that feeds itself for profits when we just want care.  Transaction fees are the middle technology folks that you don’t see, but are there to audit and correct data among other software services sold.

This being said with the big areas of profits it makes sense to keep the insurance programs affordable.  BD

WASHINGTON — The Obama administration announced Tuesday that average premiums paid by individuals for private Medicare Advantage plans, which insure about one-fourth of all elderly beneficiaries, would decline slightly next year, even as insurers provide additional benefits required by the new health care law.

“Despite the claims of some, Medicare Advantage remains a strong, robust option for millions of seniors who choose to enroll or stay in a participating plan,” said Dr. Donald M. Berwick, the administrator of the federal Centers for Medicare and Medicaid Services.

Insurers can begin marketing to beneficiaries on Oct. 1 for Medicare coverage that starts Jan. 1.

Medicare officials negotiated changes with most of the 300 plans. “As a result of these negotiations,” Mr. Blum said, “plans improved their benefits by $13 per member per month, or 5 percent, on average. The average reduction of about $155 per member per year for the 966,000 beneficiaries resulted in estimated total savings of $150 million for beneficiaries in 2011.”