We hear about more incidents as such as hospitals today and with 80 entrances someone got by with a gun as security police do check for this but can’t get everyone or have metal detectors at every door. 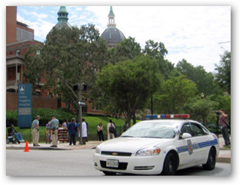 From what is stated here the fact that his mother’s condition was not corrected with surgery is what set him off as she had suffered from arthritis and rheumatism for years.  The hospital of course will review security procedures.  The shooter’s mother had been in the hospital for a number of months and he was pretty much living there with here to be at her side.

Johns Hopkins is the largest employer in Baltimore.  The Joint Commission reports acts of violence at hospitals are getting higher every year.  BD

BALTIMORE — A man who became distraught as he was being briefed on his mother's condition by a surgeon at Johns Hopkins Hospital pulled a gun and shot and wounded the doctor Thursday, then killed his mother and himself in her room at the world-famous medical center, police said.

The gunman, 50-year-old Paul Warren Pardus, had been listening to the surgeon around midday when he "became emotionally distraught and reacted ... and was overwhelmed by the news of his mother's condition," Police Commissioner Frederick H. Bealefeld III said.

Pardus pulled a semiautomatic gun from his waistband and shot the doctor once in the abdomen, the commissioner said. The doctor is expected to survive.

Pardus then holed up in the room in a more than two-hour standoff. When officers made their way in, they found Pardus and his mother, 84-year-old Jean Davis, shot to death, he on the floor, she in her bed.

"I guess he just couldn't bear to see her the way she was," said Pardus' brother, 59-year-old Alvin Gibson of Remington, Va. He said their mother suffered from arthritis and rheumatism and had surgery last week, but it didn't help her.